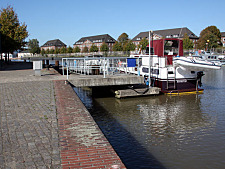 Following the development of the part of the Geeste riverbank located to the south of the Geeste bridge to open it up for more tourism (North Sea Museum, mooring places for passing boats), the city of Bremerhaven decided to improve the northern part of the riverbank as well. The development area of the northern Geeste riverbank comprised the area between the Geeste riverbank and Deichstrasse. By improving the link to the nearby city centre, the intention was to put the conditions in place for an expansion of interaction and thus also for increased commercial utilisation of the area. In addition, connections were established to the Old and New Harbours. Whilst routes between the rivers Weser and Geeste did already exist, they were not very attractive in urban planning terms, and so they were hardly accepted or used by the people of Bremerhaven.

The aim of the measure was to improve the previously deficient east-west link between the two rivers and to enhance the attractions of Bremerhaven as a city on two rivers and on the coast. By surrounding the inner city with maritime activities on the rivers Weser and Geeste, the city was to be made more attractive for tourists and the area was to be opened up for rich and varied urban life. To this end, the side streets of the inner city leading to the river Geeste were also included in the project, in order to revitalise a central commercial area by means of urban planning.

This particularly involved an improvement in the attractiveness of the waterways by opening up the banks of the Geeste for people travelling by boat, in order to gain new customers for the inner city. The project also aimed to reach the people of Bremerhaven, in order not least to ensure the economic stability and viability of the project.

The concept of the City Port of Bremerhaven, located in a former shipyard right on the Geeste, which had previously been used by water sports clubs and the German Lifeboat Association, involves the establishment of a water sports service centre, with jetties (mooring places), boat sheds, other boat-related services and a port house including a restaurant and an information pavilion, as well as the redevelopment of the Geeste terraces, designed as a home for restaurants not far from the City Port and linked via the Geeste riverside path and the Geeste promenade. During the project period, plans were drawn up for the development of the inner city which also included the area on the northern bank of the Geeste. The joint planning resulted in fresh requirements for the development and design of the open spaces and outdoor facilities of the project, and particularly for the area of the Geeste promenade.

The boat shed pictured here is part of this overall concept, although it did not receive Objective 2 funding.