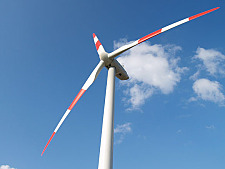 Storing wind energy in the form of hydrogen, building an electrolyser test bed, and trialling five use cases: the “Green Hydrogen for Bremerhaven” model project, funded with €20 million from the State of Bremen and the European Union (ERDF), has now been officially launched. Over two years, the research partners Fraunhofer Institute for Wind Energy Systems IWES, University of Applied Sciences Bremerhaven and Bremerhaven’s Technology Transfer Centre (ttz) will lay the foundations for a “Hydrogen Centre of Excellence” in the maritime city.

From spring 2020, the largest hangar on the former airfield is to host an electrolyser powered by an eight-megawatt wind energy installation to produce hydrogen. In future, the electricity is to be used in industry or the mobility sector. The aim is to test and optimise the process in a manufacturer-neutral manner.

The long-term goal is to offer private clients the possibility to test in a research facility the electrical characteristics of new electrolysers in an interplay with the fluctuating feed-in of electricity from renewable sources. Modern control and monitoring systems relating to grid stabilisation using hydrogen storage and storage methods are also to be researched and developed.

The funding is going towards both the test structure and the trialling of use cases. In a total of four areas, carbon-neutral hydrogen-based supply is to be tested, e.g. as an alternative fuel for the maritime sector and shipping. 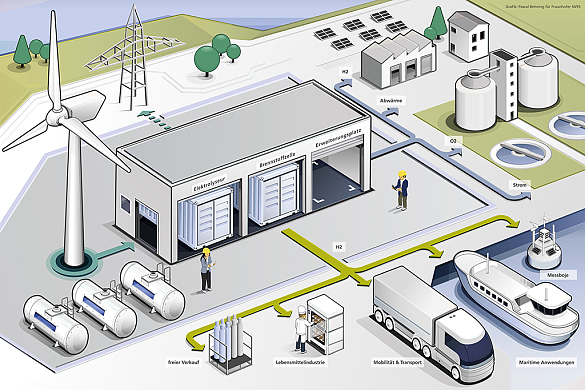 Renewable energy and corresponding technologies to generate it are a central issue for the whole of society. At present, application-oriented possibilities are being identified on a regional basis. In northern Germany, there is plenty of potential to expand wind energy. One difficulty is the fact that the energy is not always available when demand is high, or that high volumes are produced when demand is low. At present, much renewable energy cannot be used because grid congestion means that it cannot all be transported to the centres of demand.


Hydrogen as an environmental and economic factor 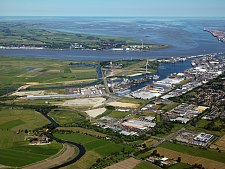 Hydrogen plays a key role for northern Germany and the State of Bremen as a possible way of storing green wind energy. The “green” electricity generated from wind energy is to be converted into hydrogen via electrolysis. The hydrogen made in this way can be used as an energy storage medium, and the stored energy can be used elsewhere and/or at another time.

In May 2019, the “Principles of a northern German hydrogen strategy” were adopted by the Conference of the Northern German Länder. The regions of northern Germany found that “the establishment of a green hydrogen industry […] has not only a significant ecological (energy transition, climate change mitigation, clean air, noise pollution) dimension, but also an economic (value creation, investment, corporate profits, tax revenues) and social (jobs) dimension”. An expansion of the hydrogen sector can therefore “serve as an example of a green economy and a holistic implementation of the energy transition, and thus makes a contribution towards attaining the UN Sustainable Development Goals”. The document goes on to say that the “northern German Länder […] intend to use their favourable conditions to generate a comparative advantage for northern Germany by now initiating the establishment of a green hydrogen industry”. The aim is to “establish and consolidate a leading region with a complete hydrogen industry value chain and to make the first visible progress on the establishment of it by 2025, particularly in the fields of stakeholder networking, the construction of technical facilities and progress on viable business models”.

As of today, hydrogen technology is not yet successfully established on the market. This is partly because of the very high investment and operating costs, and partly because of the similarly high retrofitting costs on the user side. Holistic model trials (production, distribution, usage) for the hydrogen industry are to break through this circular problem and thereby in the medium term to cut the real costs of making, distributing and using hydrogen.

Bremerhaven as a centre for hydrogen 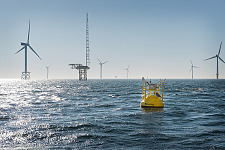 The offshore wind energy industry has become established in Bremerhaven in recent years, despite all the problems, and is based in the southern Fisheries Port. On the scientific side, the Fraunhofer Institute for Wind Energy Systems IWES has been expanded with the centre of rotor blade excellence and the nacelle test rig (DynaLab) since 2009. Beyond this, Bremerhaven University of Applied Science is also active in the field of wind energy research and the use of “green” hydrogen via its Institute for Wind Energy (fk-wind).
Against this background, the issue of “using hydrogen to store wind energy” in Bremerhaven is the logical next step. Bremerhaven is to become a “centre of excellence for hydrogen” and to play an important part in the development of a new industry.

Bremen’s Senate adopted a position on the issue in May 2019 and believes that “the establishment of a new value chain in the field of green hydrogen can provide an important structural incentive which can result in more jobs” (BB printed paper 19/2191, p. 8). The coalition agreement of the 20th legislative term of the Bremen House of Representatives from 2019 to 2023 also stresses the point that “… technologies like Power to X and the development of hydrogen as a source of energy…” play an important role in the attaining of the climate targets. In addition to a focus on the mobility sector (particularly local public transport, shipping and railways), “particular attention is to be paid to the generation of green hydrogen…” and it is to be explicitly emphasised as a feature of commerce in Bremerhaven (lines 927 ff.).

In autumn 2018, in the context of the 2014 - 2020 ERDF programme, the Senator for Economic Affairs, Labour and Ports commissioned an integral use concept from Bremerhaven University of Applied Sciences for “green hydrogen” (hydrogen made using renewable energy) for the area of Bremerhaven’s Fisheries Port and surrounding areas.
The concept worked from the current situation in the defined area to highlight ways to produce, store, distribute and use hydrogen.

The study recommends the gradual construction of a modular electrolyser system to produce “green” hydrogen in line with the emerging demand. Following this, the Fraunhofer Institute for Wind Energy Systems IWES drew up a concept for a model project (electrolysis test field). In parallel to this, there are plans to commission a study from Bremerhaven University of Applied Sciences to cover the various aspects of the development of applications.

The goal is to put in place the preconditions to successively convert the area of Bremerhaven’s Fisheries Port to the use of hydrogen. Also, the surrounding area of the Lune Delta commercial zone, which is to be developed on a sustainable basis, is to be designed to use hydrogen from the outset. 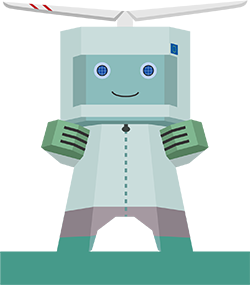