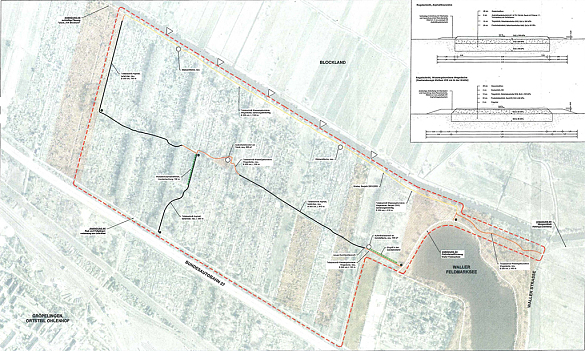 The planned trail uses the existing path which runs parallel to Maschinenfleet and links Waller Straße to the east of Waller Feldmarksee Lake with Edelweißweg to the west. In the central axis of the In den Wischen allotments, the path runs back via Waller Marschweg and uses a new crossing of the Schirmdeich ditch to link up with the circular path around the Waller Feldmarksee Lake (see diagram). The outcome is a 5km circular trail for cycling, rambling and walking which is directly linked to the residential areas via Kleingärtnerweg in Gröpelingen and Waller Straße in Walle underneath/above the motorway and the railway.

In the medium term, the path is to continue parallel to and south of Maschinenfleet, both to the east, linking up to Blocklander Hemmstraße, and to the west, connecting to Ritterhuder Heerstraße. The closure of this gap will create a cycle path linking up different parts of the city over nearly 13km, away from the public road system between Horn-Lehe in the east of Bremen and Lesumdeich in the north of Bremen.

The surface of the future circular trail will be made of various materials: asphalt will be used for the main central axis, part of which will also be used by vehicles. The top layer is to be so fine-grained that cyclists, inline skaters, etc. have a smooth ride. The asphalted sections are three metres wide, and there will be plenty of space on the grassy verges on both sides of the path.

At Maschinenfleet, the path will be natural. The existing gravel paths will be relaid to be water-resistant, with a clear width of 2.5 metres. The paths will only have a border at specially designed communal areas. The switch from one surface to another will be marked by strips of granite paving. This optical element will also be used to attract the attention of cyclists where the path joins up with communal areas.

There are trees and bushes along many sections of the trail. Where the vegetation is worth preserving, it will be retained. For safety reasons, some of the vegetation that has grown up over many years will need to be cut back or thinned out. To compensate for this, indigenous trees, bushes and fruit trees will be planted elsewhere. In addition to park benches and waste bins, the signage along the trail is to be renewed. These signs are to provide both information and guidance, and give the trail a uniform design which will be easy to remember. In view of the natural environment, the signs could be made of solid wood or of steel.


A service which will attract further services

The new trail is primarily intended to improve the leisure facilities in the west of Bremen and to make the area more attractive. Also, the area of allotments will be improved thanks to the robust path surfaces and new communal areas. Also, the vegetation on public areas along the path will be upgraded. Clear signage and guidance systems will make the circular trail easy to navigate. This will also enable further services to be provided, such as kilometre markings for joggers. The new circular trail is to become an attractive local leisure facility for the people living in the neighbouring parts of the city and aims to raise their awareness of the quality of the aquatic and natural areas in Gröpelingen and Walle.