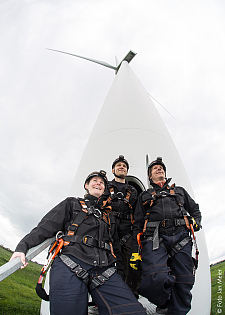 Building a Fraunhofer Application Center for Wind Energy Field Measurements in Bremerhaven
Increasing competition in the wind energy sector is creating a demand for high-quality processes to measure, analyse and optimise existing installations and prototypes in the field. Developers, manufacturers, operators, technical service providers and banks and insurance companies also need more and more robust information about the efficiency, capability and prospective lifetime of their installations.

In response to this, the Application Center for Wind Energy Field Measurements (AWF) was set up to offer its services as a partner measuring wind turbines in operation for research and development projects.
The AWF was set up jointly by the Fraunhofer Institute Institute for Wind Energy and Energy System Technology (IWES) and the fk-wind: research institute of Bremerhaven University. It has highly qualified scientific and technical staff and can draw on exemplary testing infrastructure and established, industry-related research.


The AWF is part of the organisation of Fraunhofer IWES and located on the campus of Bremerhaven University. Its main tasks are:


The AWF mainly offers measurements and assessments in the following fields:


Following the positive evaluation of the launch phase, which had also received funding, and during which cooperative structures and a viable partnership were built up, the actual phase of building up the institute is now to receive funding until 2018. Following the completion of the build-up phase, the AWF is then to become part of the financial structure of the IWES in 2019.

Application centres are a new instrument for the Fraunhofer Society which is intended to boost cooperation between Fraunhofer institutes and universities of applied science and are therefore a new feature in the promotion of research and innovation and represent a new development in Germany’s community of research institutes and higher education establishments. The main benefits can be expected to accrue to the regional economy. It will gain direct access to regional research establishments to solve problems in the development, production and operation of wind turbines and will profit from the cooperation with the AWF when recruiting experts. This will boost the competitiveness of the region’s companies in the wind energy sector in a dynamically growing forward looking market and will make a major contribution towards strengthening the offshore wind power cluster.

In addition, the research institute benefits from using the university’s networks in the regional economy as it translates its research findings into applications and recruits young scientists. In the other direction, the quality of the university’s teaching and research work benefits enormously from the close cooperation with a renowned research establishment, not least through the provision of teaching by Fraunhofer scientists at the university. The work becomes more application-oriented, and the prospects that the graduates will find good jobs improve.

During the expansion phase (2015 - 2018) the state of Bremen is providing a total of €950,000 of its own money to get the project going. Once this phase has been successfully concluded, the AWF will be integrated into the Fraunhofer IWES, so that the state of Bremen will then contribute an annual amount of €50,000 in the context of the 90/10 financing system.