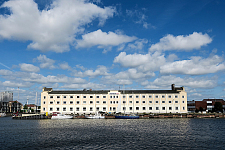 The Alfred Wegener Institute now employs more than 900 staff at its headquarters in Bremerhaven. Key fields of its activities include polar and maritime research in the Arctic and Antarctic. Further to that, the AWI studies the planet’s climatic, biological and geological systems. This makes it not only the city’s largest research body, but also one of the largest employers.
So it’s no surprise that the Institute needs more space. The existing buildings on the AWI campus have already been supplemented by the construction of the Technikum centre in the office building previously used by Deutsche See. In order to meet additional needs for space, the old office block of Nordsee GmbH is now being renovated and rebuilt.

Research and development area in the Fisheries Port is growing

The old Nordsee office building offers the necessary space and meets the Institute’s requirements. The property is located right next to the new Technikum and the other AWI buildings. It thus not only offers the scientists the space they urgently need, but also links up to the research and development area in the Fisheries Port.

The AWI plans to rent the building from the company running the port as an administrative building with 148 office, storage and event rooms. The rental contract covers an initial 20 years, and is to take effect directly following the completion of the necessary renovation work, probably in the first quarter of 2021. The renovation work basically consists of improvements to the exterior and interior of the building. The idea is to gut the various floors of the building so that the units can be designed flexibly, to tackle problems with damp, and to improve the energy performance. Elements and cladding containing pollutants will be removed and properly disposed of. The problems with damp mean that the basement needs to be fully renovated so that it can be used to store files.

The improvement to the building’s energy performance will achieve the highest heat transition coefficients (Umax energy-efficiency rates) in Bremen’s guidelines. The estimated costs of the measure based on the DIN 276 standard amount to approximately €7.48 million.