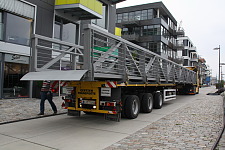 Three ERDF projects have so far been specified for the Überseestadt area of potential as designated in the ERDF programme. The central objective of the measures is to add to and strengthen the development points which exist at different places in the area by building suitable and sophisticated infrastructure and high-quality public spaces. In particular, the priority should be on realising short, attractive connecting routes between the various areas of commercial activity. This will enhance the area, with a view to attracting more companies from innovative sectors like the creative industry.

The first projects to expand and strengthen the development points which exist in the area involve the development of areas at the Europe Port and the side of the Weser, the southern part of the Überseepark, and to the north of Konsul-Smidt-Strasse between the development points of the head of the Europe Port, the Weser Station and Warehouse XI. The planned measures in the public arena will put significant preconditions in place to attract additional companies and for the related creation of jobs. Plans include the establishment of attractive links for road traffic and pedestrians both to the major commercial development points and to the water, the latter being an important factor and identifying feature for the area. 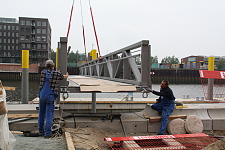 Überseepark is the name for the area between the Weser and the Timber and Factory Port. An urban development concept has been drawn up for Überseepark. It provides not only for infrastructure for commercial activity, such as road construction, but also for significant urban elements such as the creation of a river-bank promenade and a large avenue running right across Überseepark and thus creating access for the areas beyond. The first construction phase to develop Überseepark is intended to boost the development and marketing opportunities for the entire area.

The second construction phase will create a landscape park as an entry point and calling card for the Überseepark area. A small municipal forest to the north, open grassy spaces and a wide range of play and sports facilities will offer scope for recreation for people from Überseestadt and neighbouring districts.

The development of the area alongside the Weser to the west of Shed 3 is intended to allow for a higher-grade usage as a new zoning plan is established. Private investors have already reserved several specific sites. For the sites to be used, it is necessary to upgrade the area, to build service facilities for Konsul-Smidt-Strasse and to reconstruct the berths.

Development of the areas to the north of Konsul-Smidt-Strasse 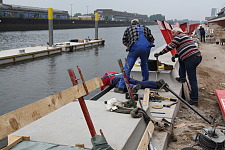 The development of the areas to the north of Konsul-Smidt-Strasse will subdivide the area into smaller plots to be used by service companies and other commerce.
Three feeder roads are being built to provide access to the commercial areas. The roads will enclose parking spaces and will be bordered by a pavement.
In order to make it easier to reach Überseestadt on foot, a set of steps and a ramp for wheelchair access are being built from the central commercial yard to the lower level of Hafenstrasse. The planned continuation of this path along Waller Wied towards Nordstrasse will substantially improve access from Überseestadt and the Europe Port in particular to the other areas of the district of Walle for pedestrians and cyclists.

Click on this Link to view a film about: Interview mit Herrn Haustein