Redevelopment of the upper section of Schlachte 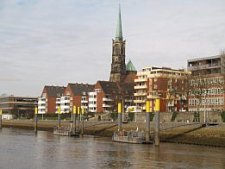 The key project of the coming years for the development of Bremen’s inner city is the realisation of the Stephani media area. Now that Radio Bremen and the Volkshochschule (adult education facility) have come to the area, with the various resultant private-sector building and conversion projects, there is a unique opportunity to put in place the type of improvement in the entire neighbourhood which has long been desired in terms of urban development policy, based on the concept of a media area with a mixture of services (especially media-related services), retailing, catering, educational and cultural facilities, and residential property.

The redesign of the upper section of Schlachte between Fangturm and Diepenau represents a major building block in the ongoing development of the Stephani media area. The reconstruction here, providing a key link across to the Überseestadt, is to be realised soon after the opening of the new headquarters of Radio Bremen in September 2007.The Stephani media area is to form a link between the west of Bremen and the heart of the city centre along the axis Überseestadt – Doventor – Obernstrasse – Ostertor. 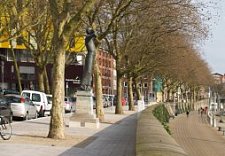 One vital aspect of the realisation of these strategic urban development measures is to rebuild an attractive waterside area looking towards the river.

The redesign of Schlachte, which was commenced in the 1990s, has clearly improved Bremen’s city centre. The goal of establishing Bremen as a riverside city has been successfully achieved by the redesign of the upper Schlachte and of the promenade along the River Weser (lower Schlachte) in the area of the Old Town. The public-sector investment has attracted a lot of private-sector investment in its wake: the upgrading of the public space along Schlachte and the Weser promenade was followed by the emergence of catering establishments, making the river bank of the Old Town an attractive place to spend time in, which has substantially enhanced the city centre as a tourist attraction. The completion of the section of Schlachte between Fangturm und Diepenau, which has so far lagged well behind, will enable Bremen to build on its image as a riverside city. It offers an opportunity to develop new educational and cultural facilities and attractive catering services appropriate to the location. 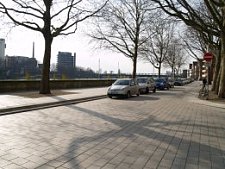 The aim is to extend the upper riverside promenade, which has already been completed from Bürgermeister Smidt Bridge to Fangturm, along to Diepenau, and to widen the pavements and the other areas along the built-up side of the road. The carriageway is to be narrowed and turned into a one-way street, going from Diepenau towards Fangturm. Parking spaces will in future be provided only on the riverbank side in the form of parallel parking. It has been ensured that the existing parking spaces are either retained or replaced by new ones. All existing trees, except two, are to be retained. 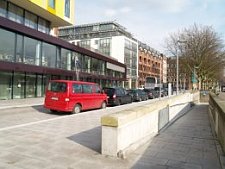 Another objective of this final construction phase on Schlachte is the creation of a wheelchair-friendly link between the upper and lower promenades, by reducing the incline of the existing ramp in front of the youth hostel. Also, two wheelchair-friendly access points are planned along the riverbank wall from the roadway to the raised promenade. 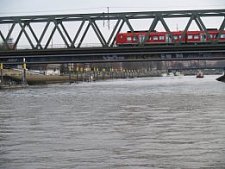 The construction of steps at the end of Fangturm is planned for 2008. The realisation has only been made possible by 50 % funding from the Wohnliche Stadt Foundation. These steps are intended to make it possible to walk from Obernstrasse via Faulenstrasse / Fangturm to the lower promenade. The location of the steps opposite Fangturm means that visitors and residents will benefit from a short-cut to the lower promenade and will thus gain a direct route to the first phase of Schlachte.