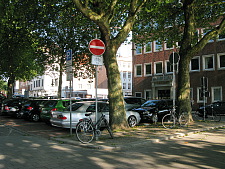 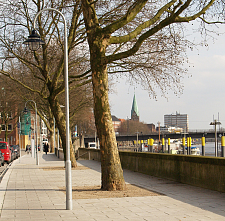 The area covered by the square is to be extended by 2 metres in each direction, giving the weekly market more space. To the west, in line with the situation to the east, a one-way street is to be built so that it will be possible to drive anti-clockwise around the square. The edges of the square will be marked by a low kerb (3-5 cm high), as is the case throughout the Obere Schlachte area.

In order to ensure that the fully grown trees can survive, the gratings around the bottom of their trunks are to be enlarged and made square. This measure takes up the formal language of the redesigned area of Obere Schlachte for the square at Fangturm.

A new design for the weekly farmers’ market is being developed together with the stallholders. It might be possible to open up the market to the outside by extending it to some areas of the pavement on the western side.

The redevelopment will retain the current use of the square (way through to the Weser Promenade, weekly market, car park). As the site, which covers approx. 1,700 m², is made more attractive, this will benefit the area as a whole. It will enable the neighbourhood to develop further in terms of urban living and as an innovative commercial zone, particularly for the creative and media industries.