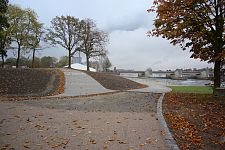 Following the completion of the construction work at the Weser power station, the sports ground used to serve the construction site is not going to resume its previous use. This means that the total area of 7,000 m² can be returned to a natural state.

The site can now be combined with the adjacent green areas and, with assistance from the ERDF, a large new park covering a total of 1.8 hectares can be created right on the river Weser. This will link the district more clearly with the river: it will be possible for everyone to appreciate the tides and hydropower, and the newly installed fish ladder will be integrated into the park.

The project will increase the attractiveness of the riverbank along a 300 m stretch, and will make it easier to experience the river Weser in this area. The Hemelingen district lacks greenery, and the enlargement of the park will improve this situation. Also, the visitors will learn more about water (hydropower, the weir, the tides, nature and water). 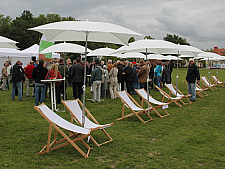 Thursday, 27 June 2013 was the big day: Bremen’s new park “Am Weserwehr” (“At the Weir on the River Weser”) was officially opened by Environment Senator Joachim Lohse. Following four years of planning and one year of construction work, the new park, which offers many large grassy areas and new pathways, now provides roughly five hectares of space for a host of leisure activities.

The existence of the park is due to the commitment of a small citizens’ initiative which proposed a redevelopment of the site when the power station was built. As originally planned, the old gravel sports ground was to be rebuilt, even though it had hardly ever been used. “The area by the weir is quite simply a wonderful place with a very special atmosphere, one of the loveliest places here in Bremen, and the site was crying out for a park, a worthy setting, and the new park now gives it the setting it deserves,” said Peter Sperlich, the spokesperson of the citizens’ initiative.

The new park retains the existing routes to the park at the Jakobsberg and the Wehrschloss. The latter building used to be a youth centre and is currently being redeveloped as a catering establishment with a beer garden, thus nicely rounding off the parkland. The park has been funded by the European Regional Development Fund, the Senator for Environment, Building and Transport, and the “Wohnliche Stadt” foundation. The green areas which now form the park include some private land owned by the operator of the Weser hydroelectric power station.