Bringing life back to the wasteland at Blockland 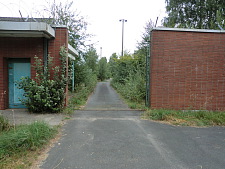 In contrast to modern prisons, Oslebshausen prison, which was in uninterrupted use from 1871, has close links with the district. Firstly, the detention centre is located right next to a residential area, and secondly many former offenders decide to settle in Gröpelingen and other relatively deprived areas in the vicinity. This creates particular challenges for the district in terms of the occupational and social reintegration of former offenders.
Since the Blockland youth detention centre has been vacant since it was closed down, the extended area of wasteland and its dilapidated buildings offers good possibilities to provide programmes to reintegrate former prisoners. By making them easier to employ and giving them vocational skills, and by offering the opportunity to do useful work in a public area, their resocialisation is to be enhanced and the burden on the district reduced. In addition to the planned training and employment schemes for offenders, space is to be created for a variety of activities in the interest of the district. The co-operation between the prison and the district aims to improve the dialogue and the social and public climate. For this reason, measures will be implemented not only on the site of the former Blockland youth detention centre, but also at Oslebshausen prison and in the centre of excellence based there. 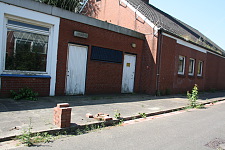 Specifically, the following measures are planned:

A social area for participants in training programmes will be built in the former Blockland youth detention centre, offering accommodation, showers and training rooms. On top of this, a works area and the upgrading of the market garden to become a public gardening project are planned. Also, the centre of excellence outside the walls of the prison is to be prepared for use as a room for classes and events. In the area around the prison, the exterior wall is to be given an artistic design, and public works of art in Gröpelingen are to be maintained. Inside the disused prison, workshops, employment and treatment rooms and places for social training are to be built in the former youth detention centre. In the adult prison, rooms for occupational therapy are planned. In the district itself, premises are to be provided for counselling, social training, addiction counselling and the serving of prison sentences imposed for failure to pay fines. 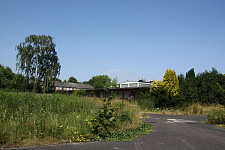 The infrastructure to be built on the Blockland site will also open up the possibility of follow-up projects. These will not only be for ex-convicts; rather, the infrastructure is to be open to all the stakeholders interested in the common good in the district. Overall, the realisation of the project will improve the social acceptance context for former offenders, and will also enhance the urban environment in the district. The current wasteland will come to be used in a meaningful and sustainable way.
An overarching approach involving different ministries and institutions is required if the aims of the project are to be achieved. For this reason, the relevant players in the administration and the district have been involved in the planning process. The project also aims to establish a viable and long-term user concept which is of relevance to the district.
In order to achieve the greatest possible synergies, the ERDF funding is to be used in cases where tried-and-tested programmes and measures are already in place, use can be made of functioning networks, and measures can be packaged together. Major pillars of the work in the district, such as Kultur vor Ort e.V. and Gröpelinger Marketing (funded from the ERDF) as well as the Bürgerhaus Oslebshausen are already represented on the site of the former Blockland prison. Local organisations and organisations related to the justice system like Hoppenbank e.V., Quirl e.V. and Gröpelinger Recycling Initiative can be integrated relatively easily, and will help to improve the image of the site and the new developments. Furthermore, the project can be linked to labour-market instruments to improve the employability of disadvantaged parts of the population.