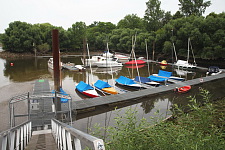 The city of Bremen has only been rediscovering the advantages of being a city on a major river over the last decade or so. In addition to the improvement of the Weser Promenade in the inner city, the lower promenade on the bank of the Weser has also been redesigned between Wilhelm Kaisen bridge and the Weser stadium.

To round off this work, the sports and sailing harbour at Osterdeich is now being upgraded. The aim is to renovate the harbour banks and to make them more ecologically valuable. To this end, the dilapidated sheet pile walls are being secured. The banks above the sheet pile walls on the east and north sides and the undeveloped bank on the west side are being made more natural by flattening the bank up to the mean flood tide level and securing them in a “natural” manner (dead wood fascines). The sheet pile walls are to be protected by rocks piled in front of them, and the gaps between the rocks will provide additional habitat in the area between low and high water level.

In order to make the bank accessible to the public, the fence is being taken down and the woods thinned out. There is a direct path from the Weser Promenade to the grounds of the club and to the club’s restaurant, with a link to the roads behind the Weser stadium. The inclusion of a gate makes it possible to temporarily close off the link path when necessary. The building of the new paths means that the club’s restaurant will lose the seating area on its terrace. It will be replaced by a new riverbank terrace facing west.

The empty space between the boathouse and the river will be redesigned and developed as a multipurpose area. Since in future the use of the slipway to the river will be restricted due to the crossing of the public path, the foundations for a crane are being built by the city on the east side of the harbour. The crane itself is being financed and installed by the “Weser” club.

Identity and image analysis for Bremen in 2012

WFB, Bremen’s business promotion company, is carrying out a research project on the identity and image of the state of Bremen and its two cities, Bremen and Bremerhaven. This study, which is being undertaken together with Bremen University’s Innovative Brand Management Department, is to observe trends and the market to find out whether the activities carried out since 2007 have made the cities of Bremen and Bremerhaven more attractive.

The main focus is on the Wissenswelten (worlds of knowledge), science in Bremen, the cultural facilities and the next-generation communication and marketing strategies which derive from the findings.

Opening of the public pathway to the Weser harbour

The newly redesigned sailing harbour was ceremonially opened in perfect sunshine on Thursday, 8 August 2013. A new pathway along a natural riverbank now links Osterdeich to the sailing club’s site. Since the old terrace had to make way for the new path, a new terrace has been built right in the harbour itself, and offers a most attractive place to relax and enjoy the view. The new picture gallery has some photos of the ceremony.