A campus around Karlsburg street will link the university with the city centre. 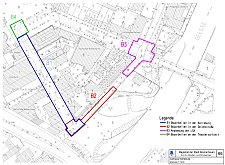 Bremerhaven’s university is to be linked up better to the city centre and the pedestrian zone. To this end, Karlsburg street is to become a traffic-free zone with the feeling of a campus.

So far, the road, which has been open to traffic, has acted as a barrier between the buildings of Bremerhaven University. By redesigning the areas in a uniform and attractive way using plants and trees, the feeling of a university campus is to be created, bringing the buildings together and linking the university better in visual and spatial terms to the pedestrian zone. The redesign will create a new walk from the city centre via Karlsburg to the Wencke Dock.


Rounding off the pedestrian zone 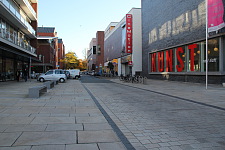 This will also mean that the pedestrian zone in Bürgermeister-Smidt-Strasse, which was redesigned 12 years ago, finally reaches its visible conclusion at Deichstrasse. In future, the public will be led to the university almost naturally alongside cultural establishments like the municipal theatre, the art museum and the cinema complex, as well as catering establishments and Ilja Kabakov’s Emigrants Memorial. The new campus areas will offer an opportunity to put on displays illustrating topics covered by teaching and research, and to hold a variety of events.

Transfer of expertise straight into the city centre 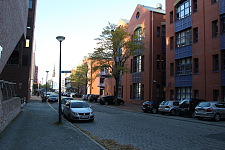 In general, as a result of the planned redesign of Karlsburg street, Bremerhaven University will gain a campus which offers all the advantages of a coherent university site whilst also – thanks to the direct access via the extended pedestrian zone – being a welcoming place right at the heart of Bremerhaven and thus fostering the transfer of expertise in a variety of ways. The university campus at this central area of the city will offer ideal conditions for encounters and communication between academics from universities and research establishments and representatives of local businesses, thus promoting an even more intensive networking of science and commerce.

The upgrading of Karlsburg is to take place in 2013/2014 and will include the following measures: