Integration of MeVis Research GmbH into the Fraunhofer Society

One of the high-growth sectors of the 21st century, the healthcare industry is a field of innovation in Bremen’s scientific and economic policy. In this context, medical technology is a core field of innovation in the healthcare system: it is a forward-looking sector in which Germany is still one of the world’s leading competitors. In particular, the world is seeing a massive increase in the use of computers in image-based medical diagnostics and therapy.

Bremen’s non-profit-making organisation MeVis Research GmbH, which was established as a non-university research establishment in 1995, is one of the leading pace-setters in this field. The software applications developed by the MeVis research scientists are in use in clinics and research facilities in Europe, Asia and the USA. Amongst other things, they facilitate, accelerate and improve the treatment of cancer and of cardiovascular, lung and brain diseases.

This clear orientation of research and development to broad clinical uses is combined with the realisation of the entire chain of innovation from basic research to the development of prototypes and products and their marketing. It is made possible by the close co-operation with the independent commercial companies set up by MeVis Research which have now been brought together in the listed company MeVis Medical Solutions AG with a subsidiary in the USA and the subsidiary MeVis Breast Care GmbH & Co. KG, a joint venture with Siemens.

The example of the integrated diagnosis and biopsy system for dynamic MRT images of the breast, DynaCAD (more than 800 facilities worldwide), shows clearly how the MeVis chain of innovation functions:

In Bremen alone, the MeVis group (research institute and related companies) currently employs more than 170 staff and thus bears witness to the positive impact on the regional economy of Bremen’s innovation policy, which relies on a close interconnection between top science and commercial success. In the case of three software products, the MeVis Group is the world leader, with a market share of 50% or more: digital mammographic diagnostics, software assistants for neoangiogenesis for the early recognition, diagnosis and biopsy of breast cancer, and the internet-based service for risk analysis and operation planning for surgery on tumours of the liver, pancreas, kidneys, brain and lungs. 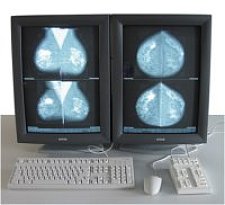 Digital mammogram diagnosis system on a computer monitor for the early recognition of breast cancer, more than 2500 facilities worldwide

In order to be able to continue this expansion on the world market in the field of diagnostic and therapeutic software, MeVis Research needs fresh research and development prospects of the type generally offered only by institutes of the Fraunhofer Society 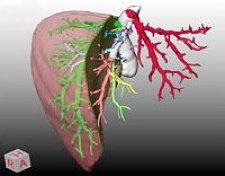 Software assistant system for the preoperative planning and risk analysis of liver operations, used to plan more than 2800 clinical cases

In June 2008, the Fraunhofer Society Committee of the Conference of Ministers of Science decided to integrated MeVis Research into the Fraunhofer Society at the beginning of 2009. This decision gives special recognition to the outstanding scientific work being done by MeVis Research and it will enable Bremen to develop unique innovative technologies. 1 January 2009 will see the beginning of a five-year transitional period (2009 to 2013), assisted with € 11 million from the ERDF programme; in particular, there is to be an expansion of the staff base. Related to this is a broadening of the substantive and methodological profile, which will be further supported by the successful acquisition of two foundation professorships, one for the university and one for Jacobs University. Following the transitional period, the institution will be included in supraregional research assistance funding from 2014 (90% federal/10% Länder funding).

The benefits to the region result firstly from the approximately 650 additional highly qualified jobs which are forecast for the next 10 years (from around 170 staff today to roughly 430 in 2013 and some 820 in 2018) throughout the MeVis Group. Secondly, the commercial MeVis Group is anticipating that its turnover will multiply six times over in the same period. The international orientation is focused on Europe, the USA and the expanding Asian market for medical technology.

It is clear that integration into the Fraunhofer Society will open up outstanding prospects for MeVis Research to become a leading world research and development centre in the field of image-based diagnostic and therapeutic software. For the state of Bremen, it is an important element in the ongoing development of the regional healthcare industry and is helping to safeguard its future.