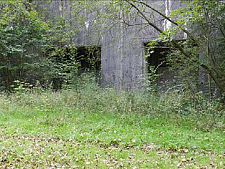 The Valentin Bunker was one of the largest armaments projects of Nazi Germany. Between 1943 and 1945, thousands of forced labourers from all over Europe worked on its construction. This means that the Valentin Bunker is probably the most significant place in Bremen at which the Nazi tyranny can be most immediately felt. In 2010, the Senate decided to make the site into a memorial. Over several years, the ruins of the Valentin Bunker will be transformed into a place for reflection called “Denkort Bunker Valentin” as part of a scientifically based memorial concept. In addition to the memorial concept, funding from the European Regional Development Fund is being provided to help create an orientation concept and a multimedia information system outside and around the bunker. The aim is to illustrate the history of the construction of the bunker and the use of forced labourers for individual visitors and guided tours interested in history.

A pathway called the “information strip” provides visitors with information about the construction of the bunker, why it was built, and the use of forced labourers. The pathway leads through the bunker, around the outside and along the River Weser. It presents the information which was already known, as well as new findings and previously inaccessible sites. The information is linked in each case to the place where the visitor is standing. At 22 stations, historic photos, short texts and quotations from former prisoners and information about the context are presented. Multimedia guides and smartphone apps offer additional multimedia content like audio and video recordings and additional images and source material.
The orientation and information concept aims to enable visitors to reflect on the issue themselves and to understand the bunker and its history. All the information has been prepared in such a way that it can be grasped without any specific historical background, and will be available in both German and English. This measure is being implemented as part of the marketing strategy and strategic development of northern Bremen.