Geestemünde goes to the water 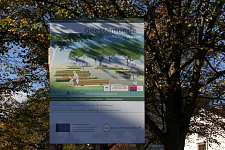 The leisure space concept “Geestemünde goes to the water” marks an important milestone on the way to implementing the urban redevelopment strategy in Geestemünde. The aim is to shift the focus back towards Geestemünde’s location directly on the waterfront, with a view to making the district more attractive. The implementation of the concept drawn up by the offices for urban planning, environmental protection and horticulture will open up the district towards the Yacht Harbour and the main canal.

The plans involve a new footpath/cycle path from the Timber Port to the Yacht Harbour which links directly up with the path which has already been built from Konrad-Adenauer-Platz to the Timber Port, and thus creates a route from the centre of Geestemünde straight to the waterside.


Unobstructed view to the commercial port 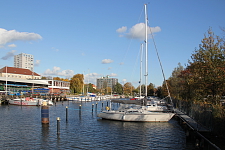 The green space between the Yacht Harbour and Elbinger Platz is being enlarged and redesigned. Also, the accessibility of the outlying areas of the Yacht Harbour is being improved. This is resulting in a line of sight from the Timber Port to the Trading Port which invites the visitor to stay awhile and wander around.

In parallel to this project, further measures are being implemented in the Research and Development Mile (R&D Mile), completing the new system of paths from the Trading Port via the R&D Mile to the dyke. The AOK health insurance fund, which is based right on the Yacht Harbour, is also helping to improve the area. The design of its car park, located right next to the harbour, is being altered to fit in with the overall plans.

The project consists of a total of three subprojects to be completed by the end of 2014: 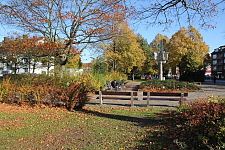 A new direct pathway is being built between the Timber Port and the traffic lights at Elbinger Platz, to recall the old canal link. The green areas around the “Memento maris” sculpture will be enlarged and made more open (the raised flower beds are being lowered, lawns are being laid, the green area re-designed) in order to create a line of sight from the Timber Port to the Trading Port. In order to make the area more attractive, it is being furnished and illuminated. 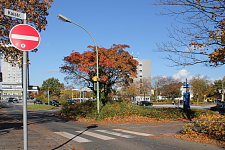 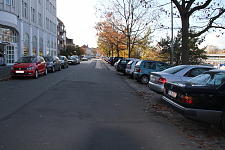 The existing footpath/cycle path is being renovated and extended closer to the Yacht Harbour. A redesign and reordering of the green areas and the existing bushes will make it possible to access the edge of the bank at the Yacht Harbour and will open up the view onto the water. Additional areas in which to spend time, as well as new furniture and lighting, will invite the visitor to stay a while. In future, a path is to lead via Kaistrasse and the canal bridge along the Trading Port to the dyke.

Aim of the project: 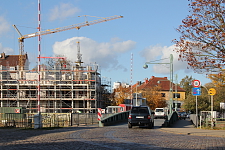 The realisation of the project will make it possible to enjoy attractive urban living close to publicly ac-cessible open areas on the waterside. The intention is to counteract a tendency to leave the area va-cant and to attract new investors. The roads and pathways are to be made attractive for pedestrians and cyclists, not least in order to offer attractive alternatives to the car when it comes to moving around the area. This will foster the development into the “Bremerhaven Climate City”.