Expansion of the German Emigration Center in Bremerhaven 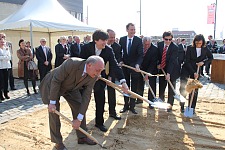 The German Emigration Center is to have a two-storey annex linked to the existing building via a glass bridge. The ground-breaking ceremony was on 15 April 2011, and the building is to be completed in Spring 2012. The costs of the new building, totalling approx. €4.5 million, will be partly funded by the ERDF.

The expansion of the emigration museum, which is well-known far beyond the borders of Bremerhaven, is intended to make the Center even more attractive and to stabilise the high level of visitor numbers seen in recent years. Since the opening of the Emigration Center in August 2005, more people have visited than had been expected. On average, nearly 220,000 guests have visited the German Emigration Center each year – including many from North Rhine-Westphalia, Bavaria and Baden-Württemberg. Many foreign tourists – mainly from the USA and Switzerland – have also come to Bremerhaven to visit the museum.

In 2007, the German Emigration Center was presented with the European Museum of the Year Award, the most important European museum prize. In 2008, the Best in Heritage Award gave international recognition to its special preservation of the cultural heritage. 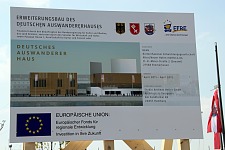 The existing exhibition space of around 2500 square metres will be increased by a further 945 square metres in the new annex. This space is to be used for new exhibits and larger temporary exhibitions, which have not been possible so far due to lack of space. To ensure that the new building is integrated into the tour of the exhibition, the two buildings are to be linked by a glass bridge and some of the content from the existing exhibition is to be relocated into the annex.