Center of the new square 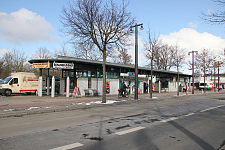 The extension to tram line 1 made it possible to close and remove the tram turning loop in St.-Gotthard-Strasse, Bremen-Osterholz. This has created a square in the centre of Osterholz which in future is to function as the neighbourhood centre for Osterholz/“Swiss quarter”.

A pavilion was built on this site in 1989, and has so far played host to a shelter for passengers and a kiosk selling tickets and newspapers. In response to the desire of the local council and a survey of the residents, the building is to be retained, adapted to new functional requirements and upgraded in urban planning terms.

In the autumn of 2013, the square will be repaved and new seats, lighting and a fountain will be installed. The new combined tram/bus stop has already been moved across to the north-east side of the new square. Also, the market, which is held three times a week, will return to the square once the new paving has been laid. The pavilion is therefore to be adapted to these new functional requirements and given a facelift in order to make it the central point of the square.

To this end, the orientation of the building needs to be aligned with the new surroundings. The entrances and windows used to face towards the tram stop, and need to be aligned with the new pathways and seating areas. The access points in the building need to make reference to the new tram stop and to the market, which will be located to the north in future.

To make sure that the building remains an attractive focal point in the hours of darkness, the lighting is to be improved. Also, at the desire of the local authorities, a new toilet is to be installed which can also be used by the disabled. This measure will also make the site more attractive for the market.