Movie about the "CFK-INTEGRAL" Aviation Project

Development of a process chain for the manufacture of highly integral components from carbon-fibre reinforced composites (CRP – German "CFK"), taking a landing flap as an example

Aircraft construction has traditionally been a key industry in the Bremen region, with around 10,600 employees and an annual turnover of approximately € 0.8 billion. Its outstanding importance for the city derives primarily from the very high proportion of value added by R&D, of around 40 %, and from what has developed into a world-wide radius of activity in the sector. This sector, along with spacecraft construction, is thus making a major contribution towards the development of Bremen as a base for high technology. Furthermore, it has become one of the most important shapers of Bremen’s image. With around 3,500 staff (in-house staff), the Bremen site is the second-largest Airbus site in Germany, and thus the second-largest base for the civil aviation industry in Germany. In view of the current “Power 8” Airbus restructuring programme and the forthcoming allocation of work packages for the new A 350 aircraft in particular, there is a current need to tangibly enhance the competitiveness of Bremen as a base for aircraft construction via product and process innovations.

The main aims of this project, which is extremely significant for Bremen’s role as a technology and aviation centre, are based on the growing pressures of competition world-wide to reduce weight in aircraft construction, and in vehicle construction in general. Alongside the aviation industry, in which the operating costs of an aircraft help to determine the decision to purchase, this also applies to the automotive industry, in which – not least for ecological reasons – the emphasis is increasingly on fuel consumption and thus on emissions.

The latest developments in manufacturing technology in the use of carbon-fibre reinforced composites, which are becoming increasingly significant in aircraft construction in view of the materials’ relatively low weight, and in designs and construction methods based on them, are enabling a new generation of highly integral composite components to be developed. The highly integral construction method – basically an integrated whole – results in a dramatic reduction in the number of individual parts. Manufacturing can thus become significantly cheaper. Furthermore, substantially lighter component structures can be used. It is important to develop these possibilities for Bremen’s companies and thus to give these companies a sound, forward-looking technological basis. 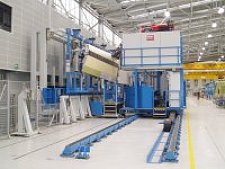 Following the decision by the pan-European Airbus consortium at the end of 2006 in favour of the development and construction of the A 350, the Airbus management in Bremen resolved to start expanding the landing flap activities in the Bremen works in the direction of highly integral components. Against this background, the aim is to establish fundamental co-operation with the Faserinstitut Bremen (FIBRE), which is one of the most interesting development partners in Bremen in terms of composite-related activities. In addition, there are the Bremen-based companies ThyssenKrupp Krause and ThyssenKrupp Nothelfer, which wish to expand their range of activities to include the aviation industry, and the medium-sized Bremen-based firm Haindl Kunststofftechnik, which already disposes of knowledge and skills in the field of composites.

In particular, the project can help Airbus Bremen to obtain the significant additional responsibility for the manufacture of parts of highly integral landing flap structures in the field of high lift systems / HLS (movable wing parts to optimise take-off and landing), which would mean that the entire HLS process chain would be expanded in the Bremen works, making the future of this field in Bremen more certain. In industry, closed process chains are generally linked to a specific location. Also, FIBRE’s expertise in the field of highly integral components would be developed further. The range of skills in Bremen’s material sciences will thus be substantially broadened in this important field of composites research and innovation. Following a successful conclusion to the project – i.e. the development of a highly integral composite landing flap and the related manufacturing processes – and the subsequent transition into landing flap production, it also seems likely that the highly integral composite construction method can be diversified into industries like mechanical and automotive engineering or wind-power plant construction.

With regard to the main contents of the project, the focus is on studying and designing three new landing flap manufacturing processes. Using simulation methods of digital factory planning, process chains are compared and optimised at an early stage. The following individual tasks derive from this:


The project was launched in June 2007 and is to be completed in May 2009. The envisaged costs, including the necessary investment, total around € 6.0 million. The project is being assisted financially under ’s new EU Objective 2 Programme (ERDF) by the Senator for Economics and Ports (€ 2.95 million) and the Senator for Education and Science (€ 0.6 million). The implementation of the support (project management) is in the hands of the Bremer Investitions-Gesellschaft (BIG Bremen).

Click on this Link to view a film about: CFKIntegral (wmv, 18.3 MB)