Opening of The Boatbuilding Showcase on April 27th, 2009 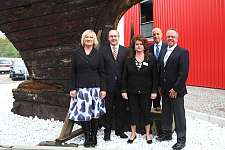 Boatbuilders at work – to be experienced from today in Bremen-Vegesack. Bremer Bootsbau Vegesack gGmbH (BBV) is located on the site of the former Bremer Vulkan shipyard. It offers training to the unemployed in boatbuilding, carpentry, design and administration.

Tourism, an important sector in Bremen’s economy, creates income and jobs both directly and indirectly. In the past, Bremen steadily lost its relationship with the water and thus the River Weser, and it is only in the last decade that it has begun to rediscover these qualities. For the north of Bremen, this means clearly focusing its services for visitors coming for the day or staying overnight on its maritime potential. The first steps have already been taken with the upgrading of Vegesack Port, the “Deutschland” training ship, Haven Höövt, the maritime mile and the Weser Pavilion at the end of the maritime mile. The Maritime Festival is a good example of the way the maritime orientation is being incorporated into local events.

The Senate gave the project the green light in June 2008, and Bremer Investitions-Gesellschaft mbH (BIG) immediately got down to the necessary construction work. The EU had allocated around € 1.6 million from the Objective 2 Programme to build the “Boatbuilding Showcase”. The topping-out ceremony was celebrated after just three months, and the site was handed to BBV on schedule at the end of December 2008. The project involved some 17 tonnes of steel and, 160 cubic metres of concrete, and 400 square metres of sand-lime brick walls were built.

The Boatbuilding Showcase offers visitors an insight into traditional boatbuilding crafts and the history of the site. It is possible to watch the trainees as they work in the yard. In the Children’s Shipyard, visitors can build their own boats and test how they float. The viewing tower offers exhibits and information displays on four storeys about current issues like “People and Work”, “Renewable Energy” and “Boatbuilding” and a view from its platform across the Weser, the Stadtgarten and the shipyard area. To enable visitors to the Boatbuilding Showcase to arrive by water, a landing stage was built on behalf of the Senator for Economics and Ports.

The Boatbuilding Showcase on the BBV site is a further element which highlights the maritime orientation of the new tourist services in the north of Bremen. City Marketing Vegesack, which was also supported under the Objective 2 Programme and has taken up residence in its new office in the building, will in future co-ordinate the various maritime tourist services in the north of Bremen from the Boatbuilding Showcase site.