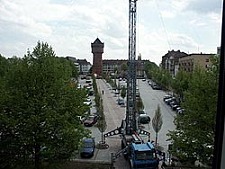 One priority of the Objective 2 programme is "problem urban areas". The suburb of Hemelingen in Bremen and the suburb of Geestendorf in Bremerhaven were selected for this. The intention of the priority is to provide comprehensive assistance to the selected areas, similar to the URBAN Community Initiative, i.e. support is available not only for traditional infrastructure, but also for projects of an integrational nature. The central project in Geestendorf is the redesign of Konrad-Adenauer-Platz and its surroundings.

The background to the project is the objective of developing both the city centre and the suburbs into economically attractive centres. In this way, the economic capacity of Geestemünde is to be fundamentally enhanced and is thus to contribute to the overall improvement of Bremerhaven’s economy. The construction of the Grashoffstrasse commercial services centre, funded outside Objective 2, began the rehabilitation of the central market square area; this project is intended to continue the development.

In order to attain this goal, further projects have been planned and realised in addition to the redesign of Konrad-Adenauer-Platz. Marketing of the commercial advantages of the location and public relations work complement the project.

A diagonal tree-lined promenade between the new commercial services centre and the former water tower (under a preservation order) lends a new image to the square. This new design of the overall square was co-ordinated with the market traders and has proved successful.

The entire area of the square has been freshly cobbled. A complete replacement of the drainage system, the lighting and the technical supply and disposal systems was necessary. The electricity supply was extended in order to permit special events to be held in future without the need for additional mobile supplies. The strips of grass at the edge of the square were relaid. At the same time, the spaces around the water tower were optically integrated in the overall space. The old collection point for materials for recycling was moved to the edge of the square and placed underground. The lowering of the bins reduces noise and dirt levels.

The redesign of Konrad-Adenauer-Platz is to be rounded off by the redesign of Neumarktstrasse and Bülkenstrasse and the conversion of ground-floor areas. Half of all of the buildings around Konrad-Adenauer-Platz are used for residential purposes even at ground-floor level. In order to stimulate the economy of the suburban centre beyond the existing northern focus on Grashoffstrasse, additional businesses are to be located in the ground-floor levels of the buildings around the square.

Restoration and redevelopment of the former water tower

The water tower built in 1891 is the symbol of the suburb of Geestemünde. As part of the redesign and revitalisation of Konrad-Adenauer-Platz, the old water tower is now being restored and redeveloped. In future, the tower is to be used as a restaurant and thus to be made accessible to the public.

Crime prevention (the "stand up for your convictions" campaign)

Another factor affecting the quality of the location is security. In order to improve this, a working group has been set up to tackle the problem. Discussions with school students about violence and drugs, an exhibition on the logo competition "courage in the face of violence", and the play-acting of violent incidents and ways to defend oneself are part of this campaign. The campaign is now being sponsored and supported by almost all the Geestemünde schools, the suburban conference, the Geestemünde commercial community