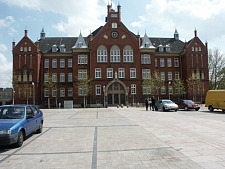 The URBAN II EU Community Initiative for the assisted area in the maritime city of Bremerhaven, centred on the suburb of Lehe, has three programme priorities:

Strengthening the economic development (priority 1), labour market/social affairs (priority 2) and the establishment of an attractive suburban centre in Lehe and the development and ecological improvement of river bank areas on the Geeste near to the suburb (priority 3: urban renewal/ecology).

Measure 3.1 – revitalisation of the suburban centre – has a total of € 2,800,000 available, which is insufficient for a complete rehabilitation of Hafenstrasse, the 1.7 km-long main commercial road; therefore, as a key measure, the central section at Ernst-Reuter-Platz has been upgraded. This central square is of commercial significance: it hosts Lehe’s weekly market and is the largest single car parking area for the commercial outlets along Hafenstrasse. The urban significance of the centre of Lehe is expressed by St. Paul’s Church, which is a protected building, the Lessing School, which marks the border of the square, and the savings bank and post office building.

The square has been returned to its original, almost quadratic form. It has been fully recobbled and encompassed by 33 trees. The electrical and water facilities have been fully modernised. The square has been linked to Lehe’s municipal park by the improvement of a path across Kirchplatz to the north. The integration of Ernst-Reuter-Platz into the network of footpaths and cycle paths leading southwards to the River Geeste is to be carried out in 2004 at the latest via the planned improvement of the Saar Park.

One key element of the renewal of Ernst-Reuter-Platz was the restoration of the facade of the Lessing School: it had suffered badly from an airborne attack on Bremerhaven during World War II; the roof was almost completely destroyed. The repairs carried out at the time were rudimentary, using the simplest means. The objective now was to return the western facade and the roof of the school, which had previously been strikingly adorned by three small decorated towers, to the original state in accordance with historical plans, in order to have a leading piece of local architecture acting as a conspicuous signal of the renewal of the suburb of Lehe.

The western facade of the Lessing School has now been restored to its historical glory. The elaborate side and front gables have been rebuilt. The missing decorative towers at the corners and the tops of the gables have been reconstructed. The numerous ornamentations and decorative elements on the gables have been copied from old photographs and drawings. The necessary brickwork, and in particular the glazed bricks, were made in a specially designed brick factory. The coats of arms which had previously been on the front of the main gable were carefully reconstructed and cut into yellow sandstone. Finally, the entire restoration of the facade of the Lessing School is highlighted by illumination at night.

The idea of setting up a catering pavilion on Ernst-Reuter-Platz came from the private sector. The integration of this additional building took place after bids for the site rehabilitation had already been invited, and it represented a delicate task for the architect and the building administration due to the sensitive urban environment. Since this building has made the market place smaller, there was intensive co-ordination with the Bremen market company, which operates the weekly market. The pavilion has been in use since March 2003, and is well received.