The mill on the wall 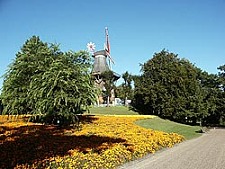 The Mill on the Wall was built in 1833 and became the property of the city in 1891. Up until 1947 it was used as a mill for grain, as originally envisaged. The mill is situated on one of the former bastions of the city walls. The idea of converting the mill stems from the mid-1990s and was part of the "Boulevard am Wall" project, set up to enhance Bremen´s city centre. The aim was to develop this little-used but very attractive area of the city centre and to include catering outlets to attract tourists.

As well as renovation and extension work in and around the mill, it was also necessary to undertake work on the adjacent area, for instance on paths, squares and green spaces. In the end the concessionary was given a well-developed property, although he had to provide the interior furnishings (kitchen, bar, seating, etc.) himself. Two floors of the mill are used as catering establishments; the concessionary lives in the mill and the unsubsidised rent he pays is used to finance maintenance of the property. The mill´s workings, in the upper storeys, have been preserved. The sails and the gallery had to be completely replaced, and the cap was repaired and partially renewed by a specialist firm, so that the mill head is again in full working order.

The mill´s catering outlets opened in May 1998: on the ground floor a café and bistro, upstairs a restaurant. Coffee features prominently: not only are various types of coffee on offer, but coffee can be roasted in the mill. A major part of Bremen´s mercantile tradition has thus been incorporated into a modern gastronomic concept.