Culture in a Bremen suburb 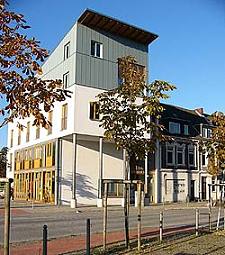 "Kultur vor Ort" (Local Culture) is a project of the URBAN I Community Initiative set up in 1997 in order to encourage the people of Gröpelingen to identify more with their suburb. The "Kultur vor Ort" concept aims to stimulate economic development in Gröpelingen by improving the area's cultural opportunities.

"Kultur vor Ort" organises and supports cultural activities and events which help to improve the area's image and to boost the commitment of the inhabitants to their district.

A second URBAN project closely related to "Kultur vor Ort" is "Torhaus Nord". "Torhaus Nord" is a building which was provided to "Kultur vor Ort" in 2001. In addition to rooms for "Kultur vor Ort", offices are also let in the building (e.g. to Gröpelinger Marketing e.V. – another URBAN project), and there is a main hall, a group activities room and a recording studio. Since July 2003, the ground floor has hosted an information bureau about the suburb, offering for example advance ticket sales for events in the suburb and seminars. The information bureau is run jointly by Gröpelinger Marketing and Kultur vor Ort. The aim of the "Torhaus Nord" concept is that "Kultur vor Ort" should be able to afford to maintain the building from the office rents. The rents from the use of the hall and the group activities room for conferences, self-help groups, cultural events or private parties, etc., are reinvested in cultural projects.

"Kultur vor Ort" has initiated and implemented numerous projects, some of them one-off events, some of them regular occasions which are still continuing. For example, "13 x Gröpelingen" was a sort of tour guide around the suburb. In 1999 and 2000, "Kultur vor Ort" produced calendars with photos of Gröpelingen, and the Senator for Economics and Ports commissioned a video about the URBAN Programme in Gröpelingen. Since 1997, "Kultur vor Ort" has been publishing "Moje Weer", a newspaper for the area. Since 1999, "Kultur vor Ort" has organised a procession called "Feuerspuren", which is held through Gröpelingen during an evening and shows the residents their part of town in a different light. There is the summer festival, the city run, the literary event called "Das blaue Sofa", "Torhaus Jazz", "MOKU Glitzerflügel" (an art event for children) and many other events held at the initiative of "Kultur vor Ort".

One key element of the work of "Kultur vor Ort" is the tourist programme taking up the issues of the suburb – industrial culture, workers' history, urban rehabilitation and development. The programme includes a visit to the old grain storehouse and thematic tours of the suburb.

In addition, "Kultur vor Ort" was entrusted with the running of the "Wir für Gröpelingen" (We are for Gröpelingen) campaign, which was also financed from URBAN Community Initiative funding. This action programme aimed to promote projects in the suburb carried out by the residents on their own initiative. The supported projects were intended to enhance the quality of life in the area or to create or improve cultural activities or leisure opportunities.

Following cessation of support from URBAN funding for "Kultur vor Ort", the organisation has been receiving money from the Senator for the Interior, Culture and Sport and from the Senator for Economics and Ports. However, this is less money than was previously available from URBAN. By renting out facilities in "Torhaus Nord", putting on events and offering its tourism programme, "Kultur vor Ort" is trying to earn money so it can continue and develop its work.

The picture shows "Torhaus Nord" (as described above), the home of "Kultur vor Ort".