Conversion of an old industrial structure into a centre for art, culture, new media and new businesses 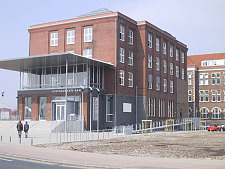 The building formerly used by the works council of A.G. Weser shipyard became an URBAN 1 project in 1995 (12 years after the yard's closure). Artists had illegally occupied the building and were using it as a venue for events and exhibitions. This use formed the basis for the new concept, which was developed by "Lichthaus e.V." (a registered association of artists) together with Bremische Gesellschaft für Stadterneuerung, Stadtentwicklung und Wohnungsbau mbH. The concept was realised via a public-private partnership which redeveloped the Lichthaus for its new purpose. The name of the Lichthaus (lighthouse) derives from the windows in the roof.

The Lichthaus houses 20 offices and conference rooms, as well as a large hall and a restaurant. The offices are let to new business start-ups in the field of digital media and services. The hall is used for exhibitions and conferences. The building's modern technical infrastructure, combined with effective and flexible management, provides an excellent environment for new entrepreneurs. The successful blend of companies, events and catering enhances the building's importance and also has a positive impact on the local area, the city and beyond. The profits from the letting of office space, the restaurant and the hall are used to promote artistic and cultural activities.

The Lichthaus was opened in March 2000 and was presented as a best-practice project at an international convention of the EU in autumn 2000.