Redevelopment of the site of the former Lürssen shipyard in Vegesack 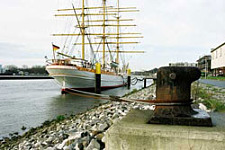 In the suburb of Vegesack in the north of Bremen, there is an attractive location in terms of urban planning between the mouth of the Lesum, Vegesack port and the railway station, right by the pedestrian precinct: a site previously used by the Lürssen shipyard which is being redeveloped for a new use. Support from the RENAVAL Community Initiative and Objective 2 (1992/93) was used to fund an international architectural competition and the first site development measures. This resulted in the Höövt Harbour project, an urban planning project focused on services, culture, tourism, leisure, catering and retailing, and subtitled "Waterside Experience". An old port warehouse, which was still on the site and was subject to a preservation order, was included in the overall concept. Remains of the oldest man-made quay wall in Bremen were discovered during the work and were integrated into the project. The planning of the project also included further elements to integrate the site into the centre of Vegesack and to improve the transport links, such as a line of retail outlets to connect the two areas, a maritime area for tourism, the reshaping of the railway station area and transport measures.

The conversion of Vegesack port into a cultural and leisure port is a central attraction for Höövt Harbour. Together with "Deutschland", the training vessel which has had a permanent mooring place on the bank of the river Lesum since 1996, and a cable lift bridge for pedestrians and cyclists, which forms a link both in terms of urban planning and for tourists between the heart of Vegesack and Höövt Harbour, the maritime flair of the suburb is enhanced, thereby stimulating tourism.

The funding from RENAVAL and the Objective 2 programmes financed development measures, rehabilitation and flood protection work, the landing place for the "Deutschland" training vessel, the building of a ferry landing place in the context of the renaturisation of the bank of the river Lesum, the creation of a walkway, and the recreation of the former bastion on the river bank in conjunction with the renovation of the port warehouse.