Reconstruction of an old Hanseatic cog 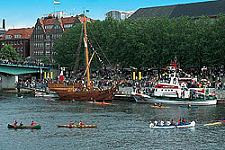 The Coherence Fund is an attempt to integrate the ERDF regional fund and the ESF social fund more closely. The Coherence Fund aims to provide a direct and mutual complement to ERDF and ESF support and to increase the effectiveness of the spending of both funds, e.g. by backing investment projects with training measures or vice versa. Both of the funds must be involved before any disbursement can be approved. The Coherence Fund has been a firm element of Bremen's Objective 2 support since 1992.

One project realised as part of the Coherence Fund is the reconstruction of the old Hanseatic cog which was discovered in the course of dredging the river Weser in 1962. The cog was the preferred type of ship used by the Hanseatic merchants from the 12th to the 14th century. The cog discovered in 1962 dates from the 14th century and is on display in the German Maritime Museum in Bremerhaven following a substantial salvaging and conservation programme.

During the conservation work, design plans were drawn up, and vessels including Bremen's Hanseatic cog have been reconstructed on their basis. The reconstruction of the Hanseatic cog was supported under the Coherence Fund of the 1994 – 1996 and 1997 – 1999 Objective 2 programmes. A remarkable feature of this project is that the reconstruction work was managed as a training measure for long-term unemployed people, thus giving them an opportunity to improve their career prospects. The training was financed by the European Social Fund (ESF), and the investment was covered by the ERDF. The Hanseatic cog was completed in 2000 and is now – following the redevelopment of the Weser promenade – a new tourist attraction at Schlachte harbour (right by the Teerhof bridge). It is run by Hal Över GmbH and can be toured.