Business park at the airport 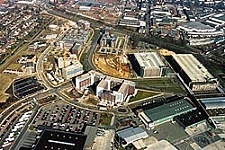 Work began on realising the "Airport 2000" concept in the early 1990s. The "Airport 2000" concept was intended to boost the capacity of the airport and to adapt the overall facility – including its appearance – to future needs. The plans involved remodelling the departure/arrivals terminal, improving the tram link to the airport, building a new hotel (with conference rooms) and a multi-storey car park, as well as the relocation of existing buildings necessitated by this. Also, room for expansion for high-tech commerce close to the airport was to be created.

Funding from the 1992 – 1993 Objective 2 programme was used to clear the site and to link it up to the transport system.

A lot of development work was needed to set up the "Airport Gewerbezentrum" business park. The routes of the road, canal and railway systems were altered, for which land had to be bought and an area of allotments moved. The site was checked for munitions left over from the War, contamination was cleaned up, plans were made for the future use, and the land was prepared accordingly. The 1994 – 1996 Objective 2 Programme funded measures to clean up pollution.

The Ochtum commercial park was enhanced with new transport links and improved sites, and made available to more businesses as the "Airport City West". The 1997 – 1999 Objective 2 Programme financed infrastructure measures, site clearances, and the detection and treatment of pollution.

The picture shows part of the central Airport City. At the curve in the road, there is the Airport Business Start-up Centre (a project of the 2000 – 2006 Objective 2 Programme), which was opened at the beginning of 2002.